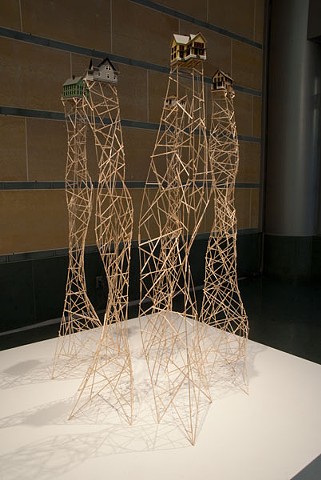 Originally conceived to play off of the idea of a futuristic life in the sky – a theme especially present at the1962 Seattle World’s Fair and in the coinciding creation of the popular cartoon series, The Jetsons – Skyward! evolved into an exhibition where artists have re-claimed the idea of a future in the sky and have taken it to a highly sensory, darkened place with vignettes of light and sound.

Is space still the final frontier? Hair and Space Museum (Emily Pothast and David Golightly) created an entrance experience for Skyward!, Northwest Passage, which uses reactive spy cameras recording visitors as they walk through the space, and sends the image to a feedback loop that casts a forever-transforming image on the floor, each person affecting the other. In a similar vein, I Want You, (Christian Petersen and Benjamin Van Citters, formerly Dumb Eyes) invite visitors to enter their technologically sophisticated projection-filled space, Cosmic Dust, where multiple surfaces of the room cascade and swirl with interactive color.

Depicting life in 2062, The Jetson’s reflects the ’60s era attitudes towards affluence and The American Dream. Playing off of these themes, in the center of Skyward! is sculpture by former Seattle, now Nashville-based, Ron Lambert and Edinboro, PA-based artist Dietrich Wegner. Lambert’s Said Something is about beauty, perfection and the futility of each, and Wegner’s Homeland, a set of model homes on precarious stilts, evokes thoughts of seclusion and the elevation of an ideal. Wegner’s second piece in the show, Nest, is hidden from plain view – a secret cloud-playhouse to find in the exhibition. At the 1962 World’s Fair, a Bubbleator (bubble shaped hydraulic elevator) would carry 100 people at a time through “The World of Tomorrow.” In as much a spectacle of wonder and magic, Cathy McClure has a tent for her “Jetsonian Farm Factory Skypad” installation, made specifically for Skyward!. The piece is inspired by the fair architect, Paul Thiry, and his original concept to have the entire fair under a single tent-like structure, "a city of its own." McClure’s "city" includes The Wheel, a kinetic strobe-lit Ferris wheel and a "climate-controlled farm factory" of animal hybrid bots under plastic domes.

Luckily for us, the future in Skyward! is not devoid of natural forms. In a collaboration from Iole Alessandrini, Hannah Viano and Vaughn Bell, Future Forest: Stump, trees with languid, wire limbs look upon patches of moss. “In this disembodied future forest we also long for the green of earth…” the artists wrote of their piece. A neighboring work, Britta Johnson’s animation 21 Landings, shows a bird-like creature, try as it might, descending again and again on an icy, futuristic surface. In another true-fiction landscape, other-worldly masses hover in the sky: Dark Star, and its accompanying 2-D studies, give us insight to the dystopic future UK artist duo Heather and Ivan Morison hope to prepare us for. Since it will be necessary to climb around through our lower atmosphere in the coming years (if one doesn’t have a Bubbelator handy), the Cloud Climbing Gloves by Jana Brevick invite you to consider a new way home.

Think you know what the future will hold? Then tell us. Hollow Earth Radio founders Amber Kai Morgan and Garrett Kelly prompt that question to visitors of Skyward! and let their web-based “Cloud” have its way with words. Predictions will be zapped to Twitter and everyone goes home with a token from this clever interactive piece.

Skyward! can be found as part of the Visual Arts Exhibitions located in the Fisher Pavilion, at the heart of Bumbershoot next to the Fisher Green Stage. The exhibitions will be open to the public starting Friday, August 31 1:00-9:00pm, and open for festival-goers Saturday September 1 through Monday September 3, from 11:00-8:00pm daily.