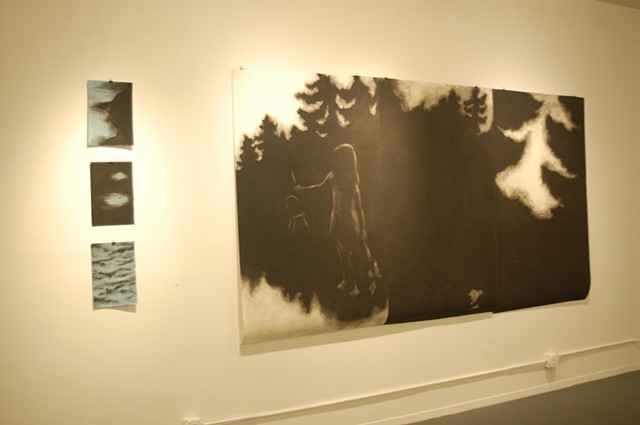 Passing Through
< previous next >

Artists: Pat De Caro, Jasmine Valandani, Rebecca Cummins, Caroline Kapp Within the most basic of art instruction lies a primary tenet – accurately depicting light and therefore shadow. The shadow is inextricable from the person or object; it is part of the form and cannot be torn away outside of myth and stories. We know this through and through, and it is perhaps because of its ubiquitous nature that shadows tend to go unnoticed in our daily lives. On the picture plane, a shadow grounds a form in space and tells us it is indeed real. Or is it something else? While in one way having a shadow represents life – the existence of the object or self, it is also completely transparent and can be looked through to forms underneath and beyond. Can something we cannot touch, hold or keep be captured by art? How can paying closer attention to shadows around us and within us shape the way we see the world?

Transparency works as a dual concept for Skagit Valley artist Jasmine Valandani. By using transparent materials to make marks in site specific installation, the shapes we see are real, yet ephemeral, always changing and untouchable. This ephemeral nature of the shadow and the light that makes it is what drives the theme of Passing Through, with work that is as Valandani states, “at the limits of the visible.”

As pioneering child physiologist Jacques Piaget discovered through his research, it is not until the age of eight or nine that a child recognizes the full physical properties of the shadow, but it is much earlier that we form an emotional response about light versus dark. We are inevitably afraid of the spaces where light is blocked, or where form is distorted by absence of light. Despite the absence of the object, the shadow is still capable of giving us a mere suggestion of the object – just enough information. In this way, a hand can become the shape of a duck or dog, or a tree can be a scary monster. Building on this idea of the shadow suggesting form, is a relationship to one of the more ubiquitous ideas of contemporary art – that in the absence of full representation the idea is enough. It compels the imagination and emotions of the viewer to an introspective level that may not be obtained when all the information is present.

In an interview about his book A Short History of the Shadow, Victor Stoichita notes, “Etymologically, photography means ‘writing or drawing with light.’ But we can also call photography a writing with shadow, or writing with light and shadow.” Caroline Kapp’s photographic subjects are constructions of space manipulating light and shadow, entertaining a playfulness with the push and pull of light and dark forms. As much as they are physical constructions, they allow the viewer to construct their own reality of the image, to question the materiality of the surface and what may lie beneath or beyond.

For the Greeks, shadows were a metaphor for the psyche. Pat De Caro’s work taps into the shadows of the psyche in a way that both depicts physical darkness and its impact on the psyche, as well as inner darkness. For many of us, the shadow of our inner child or past child remains long after we are grown, and the shifting shapes of those memories are those we continue to grapple with as we age. We can sink into the deep black spaces of De Caro’s drawings and either find comfort or the depths of the soul.

Artists for centuries have decided whether to not to include shadows in their depictions of space and form therein, but not often is the shadow the subject matter itself, the primary form of mark making or thought. Shadows have been called the “projection of the world.” The sun, being the giant light bulb projecting a shadow of the earth into space, is also our primary form of light, warmth and life for living creatures on the earth. It is worthy of our attention. Centuries ago, it was not only a provider of a good suntan, it was the primary way of marking time. Rebecca Cummins reminds us of this earlier use of the sun in a humorous way, but also creates a link between what we know intuitively, and what science tells us we should know. This bridge between science, intuition and art is where the shadow falls, across all we see and do. What better time to look closely?