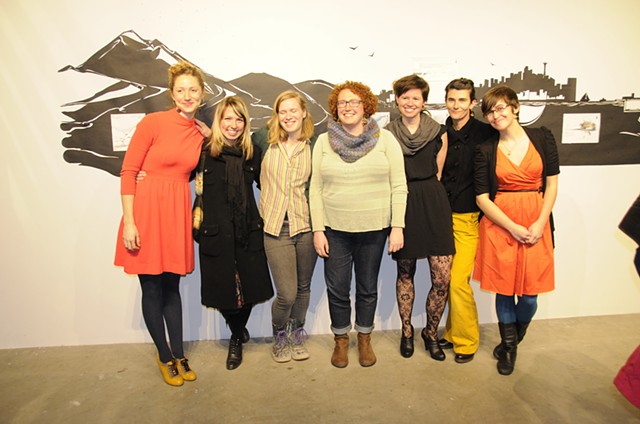 Five visual artists and one sound artist will participate in creating new works that connect to each other via the game of ‘telephone’ and use the concept of an urban lake as the basis for their conversation.

For almost a full year, this game of telephone will be played out in visual and non-verbal cues, including the language of the art-making process, unspoken truths, implied ideas, and some assumptions. The participants will speak to each other using the language of their chosen medium in making new artworks. After nearly two months of work, the artists will pass their ideas and images of works in progress along to the next artist in the telephone chain, where it can be used as an inspiration and/or a challenge until the final artist (Jessica Bonin) wraps up the process with her work.

This is however, not the end of the conversation. The public will have the opportunity to create and/or record their own reactions to the works on display through two evening events held at the Kirkland Arts Center – one opportunity at the opening of the exhibition (through the collaborative work of Hannah Viano and Emily Eagle – with the piece Message in a Bottle), and another at a TBD curator and artists talk.

How is this children’s game, where words and ideas get distorted through memory and whispers, a parallel to what the artists are being asked to do? It is a merging of process and mediums (languages), a way to allow artists to collaborate, but still create new individual works, and do so in a way where there is direct contact with the work.

As the public views the work in Urban Lake, they should be able to follow the conversation physically through the space.

The pieces shown by these six female artists will work visually as both hushed tones (secrets) and loud, bold statements (exclamations), just as one might imagine a conversation to play out among women. Women, through our recent history, have shared the intimate details of their lives though telephone conversations. There is much to say, and yet, we hold some things back from each other, we save some topics, some morsels of gossip or ideas for particular people and not others. It is in this space between where we can discover not only what was told to whom, but what was left out. The idea of an urban lake, a term that lays at odds with itself, has multiple parallels to this type of conversation.

Our region’s urban lakes are rimmed with people and conversations – in neighborhoods and parks, traversing long bridges, on commercial and recreational vessels and through flora and fauna. Each lake has a unique geographic and social presence for the people living in the Seattle metropolitan region and is an interstitial space that many, if not all of us who live here, look at or reference daily.

As an oral historian, I have always been interested in stories. Part of the inspiration for this show has also come from being involved in two artists’ projects that were centered on the idea of an urban lake as interstitial space. As a member of Whitney Ford-Terry’s master’s thesis committee, I worked with her to utilize oral histories I had conducted with Lake Union shipwrights, and watched as she constructed an online interactive map and took the stories of the lake to a new creative level. Additionally, while participating in Susan Robb’s 2011 iteration of The Long Walk, I thought a lot about the concept of an urban lake as we walked adjacent to one for most of our journey. In particular, I found that even though such a space in our landscape could be described as interstitial, it was a gap crammed full of stories. Some stories are brimming to the surface, and some are buried in the silt on the lake bottom. As someone deeply interested in the history of the landscape around me, I can’t help but want to pull out those stories and see them manifested in the contemporary language of artists I admire.